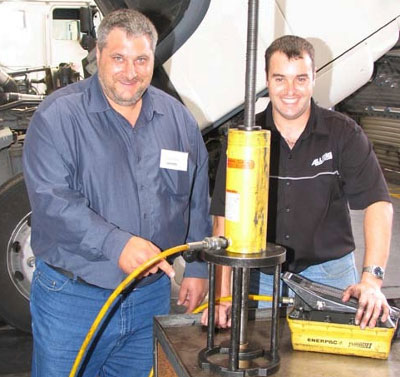 The job has been simplified from a two-man task to a task that can be readily handled by one person and, as a result of its success, Southpac Trucks has introduced further hydraulic innovations that cut vehicle maintenance downtime for its customers.

Enerpac’s compact but extremely powerful 700 bar RCH cylinder range, in capacities from 13-95 tons, is especially designed for testing, maintenance and tensioning applications, with the cylinders’ hollow plunger design allowing for both pull and push forces over strokes from 8-155mm.

The RCH 306 cylinder used in the extractor was specified by Jonel Hydraulics and replaces a screw extractor previously employed with the extractor frame used to draw the liners from DAF trucks. During extraction of the liners, the rod of the RCH cylinder extends down through the frame to tools fabricated by Jonel for different liner sizes.

With these tools locked onto the liners and rod, the cylinder is actuated by an Enerpac Turbo Pump, which uses its own exhaust air to help boost pump performance while lowering air consumption and operating costs. Using the RCH’s 155mm stroke, the liner is powerfully and precisely extracted in several stages in a simple, one-man operation.

“We have significantly reduced the time that the job used to take using manual methods,” says Southpac Trucks Assistant Service Manager John Jones. “This method is much safer as well – it is no longer a two-person activity, the constant withdraw of the cylinder liner ensures no damage to the block and it can not cock over, causing seizure”

“Southpac is very safety conscious and efficiency aware and was actively seeking ways to make the job easier and quicker. We demonstrated to Jonel Hydraulics what we wanted to achieve and worked with them to produce this tool, which functions very precisely and reliably.

“We were so impressed that we subsequently got another Enerpac cylinder to draw spring bushes from most makes of trucks and trailers we repair, including our PACCAR range of vehicles.

“Replacement of spring bushes used to be quite a time- intensive operation that involving dropping the axles down to get at the area we needed to. Now we can do the job with the springs still in place on the axles and it is much simpler,” he said. “This reduces the down time for our customers”.

Southpac Trucks has branches in Auckland, Rotorua and Christchurch, with a total of 21 independent Parts and Service Dealers making up its ALLRIG Parts and Service network. This network supports the PACCAR brands, providing a 24-hour breakdown service accessed with a single freephone number. Each ALLRIG dealer has personnel on permanent standby New Zealand wide twenty four hours a day seven days a week.