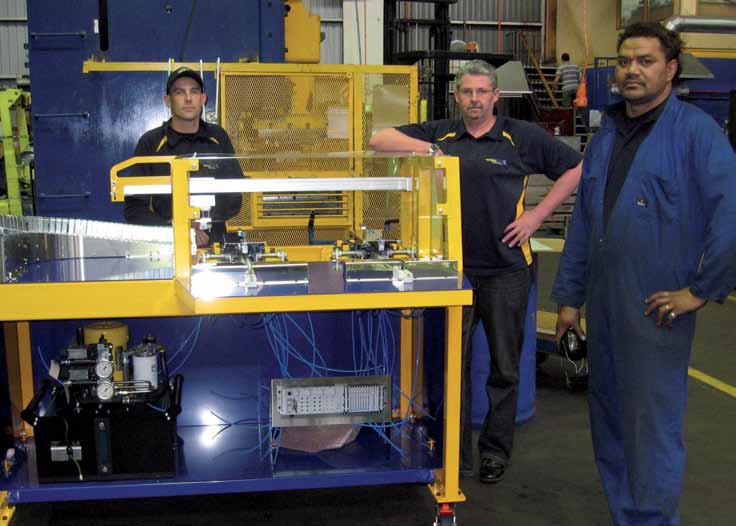 An innovative contract to supply fencing products for Tru-Test, the worlds largest manufacturer of electric fencing equipment, has led to a big increase in business for Auckland based Crighton Engineering and Manufacturing Ltd.

According to Crighton’s company manager Mike Grunig, Tru-test were keen to have their electric fence standards – both treadin standards with plastic insulators running up the wire, and their conventional pigtail standards – supplied from New Zealand.

“The manufacture of their standards had been done in China and while the initial approach was to see if we could manufacture a special FBE coated Treadin, it became obvious that the contract would only work from a payback point of view with setup costs to look at the whole contract of all Pigtail and Treadin Products” he said.

“It’s been a real success story and it has been a real test for the company to make sure all our processes and materials supply were competitive enough to ensure we could manufacture at a better price than what they had been getting from China.

“While the drop in the dollar and reduced stock holding for the customer helped to secure the contract, our quality control and our commitment to product development gave us a competitive advantage” he said.

Grunig said the contract resulted in the company employing seasonal staff to produce the 800,000 treadin and pigtail standards per annum that Tru-Test sold in New Zealand and to overseas markets.

“We have created eight extra jobs so being able to bring back manufacturing jobs to New Zealand from China has been a major coup for the company” he said.

“We have had excellent support from our suppliers like Jonel Hydraulics, who have been instrumental in helping us design and implement new processes to make us more efficient.

“For example in crimping the foot of all the standards we have two people using normal press tooling to crimp the 9,000 a day standards we need to produce.

“We are now in the final stages of new machine development with Jonel, which will make this process fully automated as we’ll go from a manual “put and take” operation to a more efficient automated process in where each crimp will only take 8 seconds.”

Grunig said the company had invested over $50,000 to develop the machine which demonstrates the commitment Crighton has to technology which will enable it to better service their client’s requirements.

“Jonel has been excellent to deal with as they had the expertise to take care of all the Hydraulics as well as all the plumbing and having the expertise to write all the instruction coding to control the operation of the machine” he said. “What this means is that we will no longer have to tie up two people and two lots of plant as we will achieve both a time and space saving and a much safer operation” he added.

Jonel’s team were excited about assisting with the project. “When we first discussed options on how to achieve the crimping action of the foot onto the kinked wire, the design had to achieve the correct forces and cycle times to achieve the time and labour savings needed.

“Enerpac produces a full range of welldesigned, versatile and reliable workholding products which provide users with dependable production automation solutions in virtually every type of manufacturing process” Jonel staff commented. “To work with Crighton right from the start and come up with a solution of an automated table that can load and bend the pigtail, crimp the foot and then unload the finished Pigtail as one process has been really satisfying” he said.