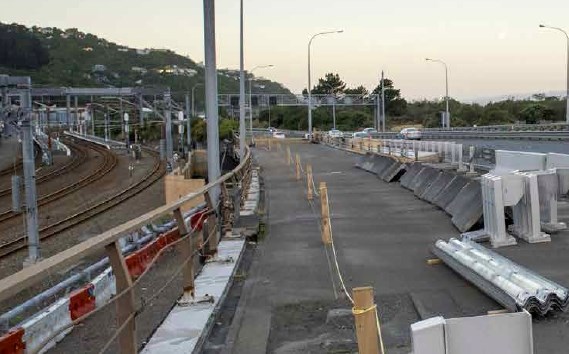 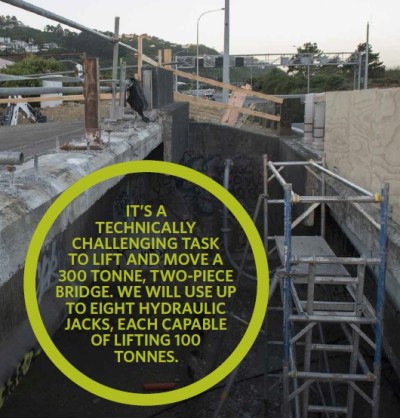 To create another northbound lane from the Aotea on-ramp to the State Highway 1/State Highway 2 split NZTA contracted Fletchers Construction to widen the Thorndon Overbridge.

Widening a large structure like the overbridge would need a significant amount of structural work, so it was more practical and cost-effective to move and re-use the nearby bridge off-ramp stub, rather than construct a new bridge clip-on.

The unused bridge stub was left over from when the Thorndon Overbridge was built in the early 1960s, to a plan which proposed an interchange at Ngaio Gorge with on and off ramps at Kaiwharawhara. These were never fully put into action.

The two-span bridge stub (each 30m long and 11m wide), unused for decades, is about to be finally brought into service.

The bridge needed to be lifted 150mm with hydraulic jacks

It’s a technically challenging task to lift and move a 300 tonne, two-piece bridge.

Fletcher Construction Infrastructure have an Enerpac Synchronised Lifting System, and also hired lifting jacks from Jonel Hydraulics to lift and push the bridge.

Jonel’s Enerpac & Hire Manager visited the site in March to discuss the operation for lifting and pushing the bridge with engineers and Project Foremen on-site using Fletcher’s Sync Lift System, and the requirements for additional hire jacks and hydraulic accessories to complement the hydraulic tooling owned by Fletchers.

To achieve the task, the team planned to use up to eight hydraulic jacks, each capable of lifting 100 tonnes. The jacks are linked and controlled by a computer which synchronises them to within a 1mm tolerance. This ensures each part of the bridge is lifted evenly and equally as any significant difference could cause the structure to crack, reducing stuctural integrity.

The lifting and moving process

As well as miscellaneous jacks and hydraulic accessories, Jonel Hydraulics had two 100T hydraulic jacks on site for last part of the bridge pushing alignment project, which was completed on the 7th July 2015.

Here’s the video of the Kaiwharawhara Bridge being lifted: