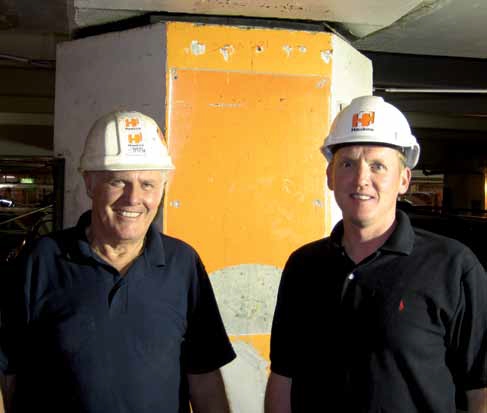 Auckland City’s Aotea Square upgrade is on a firm footing thanks to tailor-made solutions by Hawkins Construction and Jonel Hydraulics.

The $80 million development, which started in October 2008, involves an upgrade of Aotea Square, alterations to the front of the Aotea Centre, and repairing and strengthening the Civic underground car park roof.

The project which is expected to be completed in October 2010 is led by the New Zealand owned and operated Hawkins Construction. According to Hawkins Engineering Manager Tim Jones, the key to repairing and strengthening the car park roof was to develop a cost-effective and safe system for lifting the roof at each column so they could change the rubber bearing between the column and roof.

“The design brief was tight as we needed to develop a lifting mechanism so we could replace each of the 20-40mm rubber gravity bearings that sit between the top of each of the 39 columns and the roof,” Mr Jones says.

“The design factor was over 600 tonnes so understanding how to do heavy lifts, and our experience in pre-stress and pre-cast concrete construction, were critical in scoping the job and coming up with a lifting system that would work.”

“We’re operating in a confined space so we needed a short, compact, lightweight jacking solution. We spent quite a bit of time researching for the best lifting jack to do the job.”

“We went with Jonel as they came up with the best solution and were able to tailor the performance of the jack to meet our specific requirements.”

“The service was superb,” says Mr Jones. “They designed a specific solution for the lifting tonnes required, incorporating the cylinder types that would work.”

“While Enerpac initially didn’t have the correct model with the required stroke, Jonel’s product manager arranged for their manufacture in Australia based on Enerpac’s CLP range of cylinders, special 75mm-stroke, four jacks with tilt saddles that move five degrees in any direction, which gave us a total lifting power of 640 tonnes.”

Hawkins liked the end product so much they bought them.

“We purchased the jacks as this has given us total control over the job. It works out more cost effective and gives us more flexibility than leasing” Mr Jones said.

Jonel Hydraulics said performance and flexibility was the key to meeting Hawkins specifications for the job. “It’s been a good project to be associated with as its a heavy lift and Hawkins to their credit came up with a simple method of executing the job.”

“The jacks are supported on two frames, which are connected to the column via shear pins that are core drilled into each of the columns. The jacks are mounted side by side on the frames.”

“They lift the roof by approximately 10mm , the jacks are then locked off using the threaded plungers and locknuts designed into each cylinder. The old rubber bearing is removed, the column area cleaned and the new rubber bearing installed,” he said.

“Hawkins made the investment in the correct gear and their expertise in construction has resulted in an excellent result for their client. It also potentially opens up new opportunities for them in the future, as this has been a unique project.”